Robust profitability for EKINOPS in H1 2020: EBITDA margin over 14% despite a turbulent environment

EKINOPS (Euronext Paris - FR0011466069 – EKI), a leading supplier of telecommunications solutions for telecom operators and businesses, has published its first half 2020 financial statements (for the period ended June 30, 2020) as approved by the Board of Directors on July 27, 2020. The statutory auditors have conducted a limited review of the first half financial statements and will shortly issue the corresponding report. 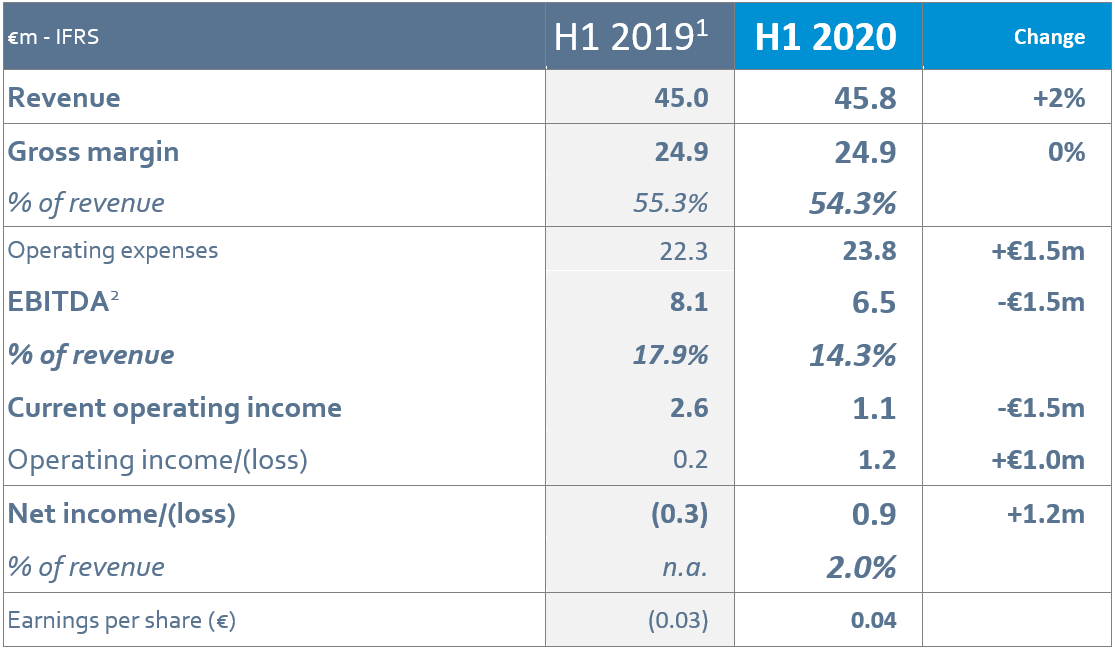 (1) H1 2019 data has been restated in light of the revision of the earn-out payment payable in shares in respect of the OneAccess acquisition. This resulted in a €0.4 million increase in the earn-out liability as of June 30, 2019, which was restated under ‘Other operating income and expenses’ for the first half of 2019 (net expense of €2.8 million versus €2.4 million as reported a year earlier).

Growth generated in H1 2020 despite the pandemic

Despite particularly challenging conditions, the Group recorded strong business momentum in the Americas (up 14.4%) and returned to growth in France (up 12.4% over the first half), after the 2019 slowdown in investments by the Group’s main customers in the home country.

This improvement over 2019 reflects tight control of the price/cost ratio, despite pressure on the supply chain in the first half, particularly for some components manufactured in China. It is also the result of the Group’s upmarket strategy, with some initial successes announced during the first half, including initial sales of 10G routers and the OTN (Optical Transport Network) platform, its virtual offering chosen by Orange Business Services, etc.

Net income, Group share came to €0.9 million for the first half, compared to a loss of €0.3 million a year earlier.

Cash flow from investing activities amounted to a €2.2 million outflow, including €1.6 million in CAPEX (non-current assets and R&D), up 16% due to the acquisition of the OTN business, and a €0.6 million expense relating to the buyout of minority interests of former OneAccess shareholders.

Cash flow from financing activities amounted to a €13.5 million inflow in H1 2020, including (i) a €2.9 million capital increase following the exercise of warrants and stock options by Group employees, (ii) new bank borrowings totaling €11.4 million net of repayments, including a €12.0 million “PGE” - state-guaranteed loan obtained in May 2020 and a €0.5 million loan under the PPP (Paycheck Protection Program) in the United States. In the face of the unprecedented global situation caused by the coronavirus, EKINOPS managed to maintain its growth trajectory in the first half of 2020. Despite the impact of the health crisis on revenue, the Group was able to strengthen its market positions, in particular in the United States and France, posting double-digit growth in both regions. It demonstrated its operational resilience by improving its gross margin compared to full year 2019 and maintaining a high EBITDA margin.

EKINOPS moves into the second half of the year with less visibility than usual. Nonetheless, the Group plans to stay focused over the coming months on high value-added applications such as SD-WAN (Software-Defined Wide Area Network), white boxes and uCPE, OneOS6, VNF, services, 1G/10G routers, OTN and SDN software.

Backed by a solid gross margin in the first half of the year and the success of its upmarket strategy, the Group is confident in its goal of achieving a gross margin rate between 50%-55%, higher than industry benchmarks.

Meanwhile, EKINOPS intends to continue its prudent spending policy over the coming months in order to keep expenses under tight control..

Given the opportunities for value creation that have emerged during the crisis, EKINOPS should be able to step up its recovery once the effects of the crisis have subsided, before renewing its long-term goal of achieving growth of over 10%.